skip to main | skip to sidebar

Different folks are doing different things to stay sane during the self-isolation/lockdown we are all experiencing all over the world thanks to COVID-19. My solace is art, literature, and, especially, music (sometimes some food and drink as well!).
And, folks, there is such a thing as synchronicity! I had been looking forward for some time to "La Passione", a new album by superb Canadian soprano and conductor, Barbara Hannigan, which just released this past Friday after being in the pipeline for months. The timing could not have been more a propos for our present global moment.
The album has haunting and powerful songs by (near) contemporary composers Luigi Nono and Gérard Grisey, but the centrepiece is Haydn's Symphony No. 49 in F minor, "La passione". The title, apparently not Haydn's, refers to the Passion of Christ and the stages of the Cross. Whether the title is apocryphal or not, this is perhaps Haydn's most powerful, personal, and existentially charged work. It should also be noted that Haydn was a devout and observant Roman Catholic, a well documented fact, so that the casting of doubt on the title, suggesting it may reflect a theatrical representation of the Passion, rather than the Passion itself,  may reflect rather  the biases of "secular" critics -- just a conjecture by me, not based on historiographical research.
Many well-known recordings scrub down the sharp edges of the work and present is as buttoned-down, slick, soulless, middle-period, and run-of-the-mill -- good old Papa Haydn. Hannigan and her inspired Dutch musicians blow this myth apart. Hannigan does for Haydn what Bernstein did for Mahler. The emotional core of the piece, the long first movement, is here given all its repeats and played at an appropriately sepulchral tempo -- clocking in at close to an incredible 15 minutes -- as long as some movements in Mahler! The remaining movements maintain the intensity level.
A very special touch is the harpsichord part, which plays at variance with the music on top, not relegated to a generic continuo which mimics the bass line. Hannigan, in her own liner notes, describes this as the "dark, lost angel". The effect is extraordinary. This is where genuine authenticity -- coming to the core meaning of a work of art -- sometimes parts ways with pedantic authenticity as in some of the "historically informed performance" folks.
Listening to this recording has given me a lot of solace, and helped me think through -- or, better yet, feel through -- the existential questions swirling around all of us now.
If you want to check this amazing recording out, the link below points you to various sites to download or stream the work. The usual suspects, Apple Music and Spotify, are streaming it, and it's available for purchase from other standard sites.

A last thought from me: I've been thinking quite a bit of what that last music is one might want to hear, in these existential times, in case one needs to make such a choice. The obvious choices for me would have been Mozart, or Beethoven, or Schubert, Mendelssohn, Bach or Brahms, (maybe) Mahler, (just possibly) Wagner, (unlikely) Strauss. It is said that, on his deathbed, Schubert wished his friends to play Beethoven's C sharp minor string quartet, Op. 131, as the last music he heard. Some, including me, might pick Schubert's great C major string quintet for one's swan song. Suddenly, out of left field, came this stunning "La passione" from Hannigan, that I have been listening to "on loop" (as they say) since first hearing it a few nights ago. I recall the sage words of an old professor of English of my brother, whom I also knew a bit, a fine Chaucer scholar and a great lover of classical music, who said, "In the end, we always come back to Haydn..."

I'll give the last word to Hannigan: "Haydn’s Symphony 49...is a universal ritual for loss and grieving, beyond a single figure. The symphony is the journey of souls: the ones enduring on earth and the ones who have departed."

The first page of the full score to Haydn's "La Passione". Notice the inscription at the head, "In Nomine Domini" -- "in the name of the Lord". At the end of the work, Haydn writes, "Fine laus Deo" -- "the end, praise be to God": the sacred, the secular, and aesthetic are melded. 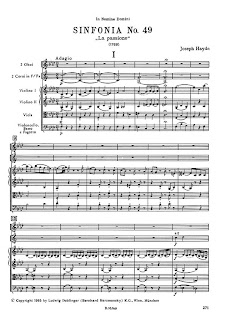 Posted by Vivek Dehejia at 6:38 AM